She is “hospitalized” in the “dread land of Rouzbeh” (mental hospital) 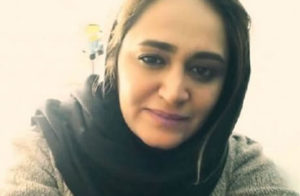 Iranian civil rights activist Leila Mir-Ghaffari, who had been arrested on September 26, 2017, is being kept in inhuman conditions in a mental hospital in Tehran.

She has been chained by the hands and feet to her bed and the chains are opened for short intervals only when she needs to get out of the room to get fresh air.

Ms. Ghaffari’s health and psychological conditions have been reported as grim and she is not able to speak due to the medications she is forced to take.

It is not clear which intelligence agency is responsible for her arrest and what are the charges against her.

Leila Mir-Ghaffari was also summoned and interrogated in October 2016 for participating in Reyhaneh Jabbari’s memorial ceremony.