Our Glorious Elections: in Guardian

Iran elections: gains for Rouhani could help promote greater opening to the west 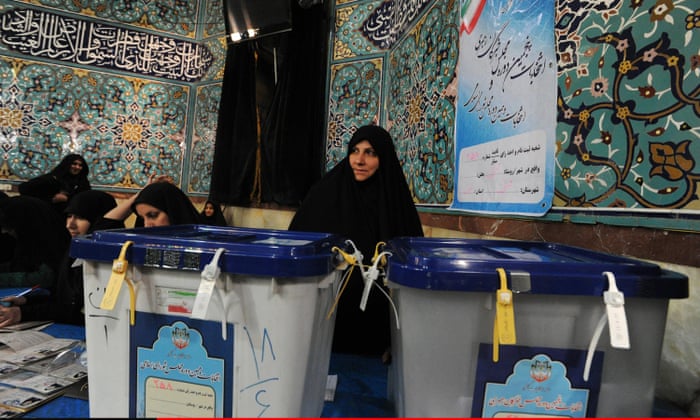 Early results in Iran’s hard-fought elections are showing strong gains for supporters of President Hassan Rouhani that could help promote greater opening to the west and limited political advances at home – and secure him a second term in office.

Friday’s polls for the parliament and the assembly of experts – its role is to choose the Islamic republic’s clerical supreme leader – were extended by nearly six hours due to a high turnout that was seen as likely to favour the reformist-moderate camp.

In one highly significant result, the former president, Ayatollah Akbar Hashemi Rafsanjani – a key Rouhani ally – was leading the race for membership of the assembly in Tehran, the official IRNA news agency reported on Saturday.

The interior ministry said it had counted 33 million of 55 million votes by Saturday afternoon, though a final national tally is still unlikely to be known before Monday. The preliminary turnout figure was 6o%, it said, less than the 70% that had been predicted.

Early returns showed that none of the competing factions would win a majority in the 290-seat majlis (parliament), but reformists and moderates appeared on track to win their strongest presence since 2004 at the expense of conservative “principalists”. Broader support in parliament would strengthen Rouhani’s hand – though under Iran’s hybrid political system key decisions still rest with the supreme leader, Ayatollah Ali Khamenei.

Reports from the semi-official Fars and Mehr news agencies and a count conducted by the Associated Press showed the hardliners were the main losers of the vote.

The elections were the first since Iran’s landmark nuclear agreement last summer and the lifting of sanctions in mid-January. The short and carefully controlled campaign – marked by the prior disqualification of hundreds of candidates – was dominated by the state of the economy, which has improved in recent months though few tangible gains have trickled down to ordinary people.

The election was seen as an important test for the popular Rouhani, who hopes to win a second presidential term next year. “The reformists and moderates have managed to take at least a third of the seats,” Sadegh Zibakalam, professor of political science at Tehran University, told the Guardian. Rafsanjani’s success in the assembly was extremely important. “We can’t say that the ultra conservatives were defeated, but the conservatives can’t say they received a huge mandate,” he said.

Iran’s last parliamentary polls were boycotted by reformists in the wake of the 2009 presidential election, when the vote was rigged to allow Mahmoud Ahmadinejad to win a second term as president. The presumed winners of that contest – Green movement leaders Mir Hossein Mousavi and Mehdi Karroubi, remain under house arrest – a vivid example of Rouhani’s failure to make progress on sensitive domestic political issues.

The Fars and Tasnim news agencies, both affiliated with hardliners, began publishing unofficial lists of winners, claiming conservatives had scored some early wins. The Fars count listed about 30 MPs and more than 20 members of the 88-strong assembly of experts – mostly conservatives – as having won seats.

The precise shape of the next parliament will take time to emerge. Because so many reformists and independents were disqualified, many candidates are unknown to the public and party lines and affiliations have become blurred, with some powerful conservative figures now backing Rouhani.

“Some of them are like watermelons,” said Saeed Laylaz, a reformist political commentator. “Until you open them up you don’t know what’s inside.” Zibakalam said he expected a parliament where Rouhani would face less opposition and generally be less docile.

The result in Tehran – where, including the surrounding province, there are 36 majlis seats – will be closely watched because of its political importance. Nearly 5,000 candidates, including about 500 women, were competing.

Associated Press and Reuters contributed to this report