Our Glorious Elections: in Independent

Iran elections: Reformists confident of making gains after election turnout of 70 per cent

Reformers backing President Hassan Rouhani hope today’s election will weaken the hardliners and help modernise the nation after its historic nuclear deal with the West. Kim Sengupta talks to voters in Tehran 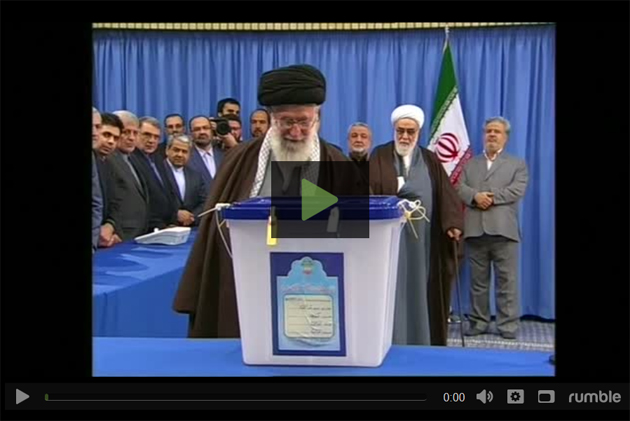 Some brought their young children along, others pushed elderly relations in wheelchairs. There were bearded clerics in flowing robes and turbans, and young women in tight jeans and sunglasses with headscarves barely covering their heads. Members of Iranian society, in all its diversity, had come to have their say in elections which will be pivotal for their nation.

Queues snaked around the road outside polling stations across the country, many of which had to extend their closing time beyond the scheduled 6pm so that all those hoping to vote could take part. Initial estimates of the turnout stood at around 70 per cent of the electorate, indicating that some of the apparent apathy earlier in the campaign had dissipated as the elections came to a head.

There was also a rise in angry recriminations in those final days as the contest became ever tighter between hardliners and the reformists backing Hassan Rouhani, the President who signed the nuclear deal with world powers and began to bring Iran in from the cold.

There was, however, little overt evidence of that bitterness yesterday as the ballot took place. The atmosphere, on a sunny day in Tehran, was relaxed and calm. People from opposing camps exchanged banter. But the mood among liberals was markedly more upbeat than that of the hardliners. For the reformists it had risen from despair, when thousands of their candidates were barred from standing by the Guardian Council that supervises the elections, to hope and expectation, as they mobilised support and forged strategic alliances with more conservative politicians who had become alarmed by the hardliners.

Reformists were further buoyed by the news that Major General Qasem Soleimani, the head of the Quds Force of the Revolutionary Guards and the most powerful military figure in the country, had supported parliamentary speaker Ali Larijani, one of the senior conservatives who had backed the reformists.

Meanwhile, a senior leader of the hardliners, Gholam Ali Haddad Adel, acknowledged that he was worried about a large reformist presence in parliament after the polls as he tried to get out his own vote.

Such a result would help President Hassan Rouhani’s drive to modernise Iran’s economy and legal framework to take advantage of new opportunities since the lifting of international sanctions.

However, a parallel election for the Council of Experts, the body which selects Iran’s Supreme Leader, is likely to leave hardliners in control as most liberal candidates were disqualified. Ayatollah Ali Khamenei, the current holder of that powerful office, is 76 and is said to be ailing, making his succession an issue which may need to be addressed in the near future.

But now he is determined to deliver his message for the election. He entered a government hall from behind blue curtains to address a small audience of invited journalists. Beneath a photograph of Ayatollah Khomeini, the founder of the Islamic Republic, the Supreme Leader cast his vote, then delivered a sermon on the obligation of fellow Iranians to do the same.

“Whoever likes Iran and its dignity, greatness and glory should participate in this election,” he said. “We have enemies who are eyeing us greedily. Turnout in the elections should be such that our enemy will be disappointed and will lose its hope. People should be observant and vote with open eyes.”

The Ayatollah has been critical of Western support for the reformists backing President Rouhani, warning voters not to be manipulated into turning against each other by the US.

As Mr Rouhani cast his vote, he was conciliatory. “Whoever comes out of the ballot boxes with the votes will be respected by us and everyone will respect the vote of the majority of the people,” he said.

Among those voting at a mosque, which was a temporary polling centre, was teacher and author Sayed Mohammed Khansarynezad, 93, who said he had voted at “every single election in Iran people here can remember”.

This included 2009, when the hardline incumbent president Mahmoud Ahmadinejad was declared the winner despite widespread charges of vote rigging. Dozens were killed and injured as the security forces suppressed protests.

In 2013, however, Mr Rouhani was the surprise victor after a late surge in support. Mr Khansarynezad declined to say which side he was voting for but added: “I am happy with the way things are going. Look, people are getting on with each other here – we have to work things out together.”

For the first time, women and men were voting side by side without the curtain used to segregate them in previous polls. “I am so glad that keeping people apart has gone. Why did this even happen here? We are not Saudi Arabia,” said Nilufer Shahi, 25, a graphic designer.

“Change will come, Iran is going in the right direction.”