By CHARLOTTE DAVIS
The BBC host hit out at Emmanuel Macron over the “desperation” of his closest advisors to save the French President from his plunging popularity ratings. Hosting BBC This Week, Mr Neil said: “If you think things are rough for the Maybot and Jezza the red and believe me they are, that’s nothing compared with President Macron’s predicament across La Manche and I am not talking about gilets jaunes trying to set fire to his capital every weekend.

Now, that’s what you call desperation

Oh no, I am talking about the thoughts of his most loyal advisers who think his popularity his popularity is now so dire that the best way to improve his poll ratings would be if his wife died.

“Died so that he can project himself to the nation as a grieving widower.

“Now, that’s what you call desperation.” 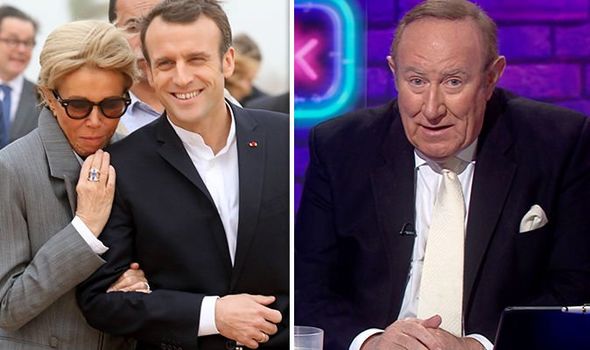 A source close to the couple told the authors: “For them, this grieving widower would be wonderful. They are in love with him.”

The book is by the Parisien newspaper’s political journalists Ava Djamshidi and Nathalie Schuck.

Former teacher Brigitte Macron, who at 65-years-old is 24 years her husband’s senior, has made mistakes as First Lady, such as allowing the newspaper Le Monde into the Élysée Palace to view renovations worth around €600,000 (£524,000) just three days before the first “yellow vest” protests, which were sparked by high taxes and low wages.

The French President has seen his popularity ratings plunge over the past few weeks following months of crippling and sometimes violent demonstrations by anti-government “yellow vest” activists.

French MPs approved a controversial provision in the draft anti-rioting bill on Wednesday.

The bill will see protesters who “voluntarily mask their faces” fined up to £13,000 and handed a one-year prison sentence.

The provision stipulates that it will be up to the person charged to prove to judges that they did not intend to commit a violent act, and give a “legitimate reason” for covering their face.