From Wikipedia, the free encyclopedia

Jump to navigationJump to search

Mărțișor (mərt͡siˈʃor) is a celebration at the beginning of spring, on March the 1st[1] in Romania, Moldova, and all territories inhabited by Romanians and Moldovans.

The word Mărțișor is the diminutive of Marț, the old folk name for March[2] (martie, in modern Romanian), and thus literally means “little March”.

Mărțișor, marț and mărțiguș are all names for the red and white string with hanging tassel customarily given on the 1st day of March. In the olden times, the string could be black and white or blue and white.[3] Giving this talisman to people is an old custom, and it is believed that the wearer will be strong and healthy for the year to come. It is also a symbol of the coming spring. Usually, both women and men wear it pinned to their clothes, close to the heart, until the last day of March, when they tie it to a fruit-tree twig. In some regions, a gold or silver coin hangs on the string and is worn around the neck. After wearing it for a certain length of time, they buy red wine and sweet cheese with the coin, according to a belief that their faces would remain beautiful and white as cheese and rubicund as the wine, all year.[4]

In modern times, and especially in urban areas, the Mărțișor lost most of its talisman properties and became more a symbol of friendship, love, appreciation and respect. The black threads were replaced by red, but the delicate wool string is still a ‘cottage industry’ among people in the countryside, who comb out the wool, dye the floss, and twist it into thousands of tassels. In some areas, the amulets are still made with black and white string, to ward off evil.[5] Related to Martisor and also symbol for spring in Romania is the snowdrop flower.

In ancient Rome, New Year’s Eve was celebrated on March 1 — ‘Martius’ — as the month was called in honor of the god Mars. Mars was the god of war and an agricultural guardian, who ensured nature’s rebirth. Therefore, the red and white colors of Mărțișor may be explained as colors of war and peace.[6]

The Thracians also celebrated New Year’s Eve on the first of March, a month named after[citation needed] the god Marsyas Silen, the inventor of the pipe (fluier, traditional musical instrument), whose cult was related to the land and vegetation. Thracian spring celebrations, connected to fertility and the rebirth of nature, were consecrated to him.

In some areas, Daco-Romanians still celebrate the agrarian New Year in spring, where the first days of March are considered days of a new beginning.[7] Before March 1, women choose one of the first nine days of March; the weather on that day would predict how year will go for them.[8] In other areas, young men similarly find out what their wives will be like. The first nine days of March are called Baba Dochia’s Days, Baba Dochia being an image of the Great Earth Goddess.

Initially, the “Mărțișor” string was called the Year’s Rope (funia anului, in Romanian), made by black and white wool threads, representing the 365 days of the year. The Year’s Rope was the link between summer and winter, black and white representing the opposition and the unity of opposites: light and dark, warm and cold, life and death.[9] The Mărțișor is the thread of the days in the year, spun by Baba Dochia (the Old Dochia), or the thread of one’s life, spun at birth by the Fates (Ursitoare).[10]White symbolises purity, the sum of all colours, and light, while black symbolises origins, distinction, fecundation and fertility, being colour of fertile soil. White is the sky, the Father, while black is the mother of all, Earth.

According to ancient Roman tradition, the ides of March was the perfect time to embark on military campaigns. In this context, it is believed that the red string of Mărțișor symbolises vitality, while white symbolises victory.[11] Red is the colour of fire, blood, and a symbol of life, associated with the passion of women. Meanwhile, white is the colour of snow, clouds, and the wisdom of men.[12] In this interpretation, the thread of a Mărțișor represents the union of the feminine and the masculine principles, the vital forces which give birth to the eternal cycle of the nature. Red and white are also complementary colours present in many key traditions of Daco-Romanian folklore.

George Coşbuc stated that Mărțișor is a symbol of fire and light, and of the Sun. The colours and the traditional silver coin hung from the thread are associated with the sun. White, the colour of silver, is a symbol of power and strength. The round form of the coin is also reminiscent of the Sun, while silver is associated with the Moon. These are just a few of the reasons why the Mărțișor is a sacred amulet.[13]

In Daco-Romanian folklore, seasons are attributed symbolic colours: spring is red, summer is green or yellow, autumn is black, and winter is white. This is why one can say that the Mărțișor thread, knitted in white and red, is a symbol of passing, from the cold white winter, to the lively spring, associated with fire and life.[13] 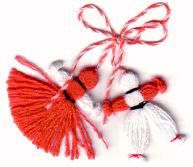 Romanian ethnographers consider Mărțișor and martenitsa to be clearly related, and of Thracian origin.[14] According to one of the several proposed legends about the martenitsa in Bulgaria, the custom has roots in the late seventh century. This legend, first attested in the 20th century, says that the Bulgar Khan Asparukh sent a message to his sister across the Danube about his victory over the Byzantine Empire. He tied his letter with a white string to the leg of his messenger eagle. The Byzantines saw the eagle flying and shot and injured it with an arrow. The message was delivered but the white string was stained red with the eagle’s blood. The Bulgars then started to wear this thread. 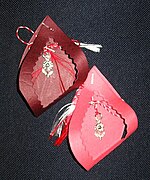 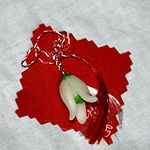 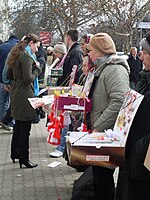