Rabbi Yosef Berger: we should prepare a crown, since the first act of the moshiach will be to restore the Davidic Dynasty

You have proffered him blessings of good things, have set upon his head a crown of fine gold. Psalms 21:3 (The Israel Bible™) 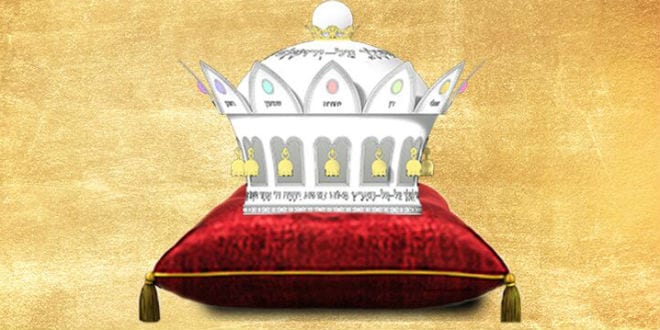 Rabbi Yosef Berger, the rabbi of King David’s Tomb on Mount Zion, has initiated a special project to create a golden crown to be presented to the messiah-king upon his arrival in Jerusalem.

Rabbi Berger, a direct descendant of King David, explained that the founding of the State of Israel and the Six-Day War were overt miracles and that we are today living in the beginning of the messianic era. Creating such a crown, he said, and uniting the 70 nations of the world around the project, will hasten the arrival of the king.

“For 2,000 years, Israel has waited for the moshiach (messiah),” Rabbi Berger said. “As a symbol of our belief that this period of waiting has ended, we should prepare a crown, since the first act of the moshiach will be to restore the Davidic Dynasty, which will be visibly unlike any other kingship that has ever existed.”

Berger has a strong personal interest in the project. He is the son of Rabbi Shalom Berger, the spiritual leader of thousands of members of the Mishkoltz sect of Hasidic Jewry. Rabbi Yosef Berger can trace his family lineage, from father to son, directly back to King David.

To illustrate the special nature of the Davidic Dynasty, Rabbi Berger cited the Prophet Zechariah.

And Hashem shall be king over all the earth; in that day there shall be one Hashem with one name. Zechariah 14:9 am

“The rule instituted by the moshiach will unite all 70 nations, bringing them in joy to Mount Zion to serve Hashem (God, literally ‘the name’),” Rabbi Berger said.

The rabbi emphasized that a king of Israel would ensure that the exile would end, the ingathering of the exiles would be complete, the Temple would be rebuilt and the Temple service reinstated.

“We are commanded to anticipate this, to pray for it, at all times until we merit seeing it with our own eyes,” Rabbi Berger said. “It is written in the Midrash (homiletic teachings) that the generation that anticipates and yearns for God’s kingdom is redeemed immediately. But this anticipation, like every mitzvah (Torah commandment), is made stronger when accompanied by a physical action.”

Rabbi Berger told a story to illustrate the point concerning a specific tzaddik (righteous man) that many people visited to request blessings. One time, two couples approached him, both requesting to be blessed with a child. The tzaddik complied. The next year, the couples returned. The blessing given to one couple had materialized but the other couple remained childless. When they asked why their blessing had gone unanswered, the tzaddik gave a simple answer.

“After I blessed them, they went out and bought a carriage for the baby,” he said.

Rabbi Berger explained the lesson illustrated in the story.

“True belief leads to action,” he said.”And action strengthens the heart to believe even more. It is the strength of the belief that makes the blessings come true.”

The rabbi noted that amazing efforts have been made to prepare for the Third Temple and all of the utensils stand ready, but no preparations have been made for the messiah who will build the Temple.

“Creating a crown for the king is unprecedented,” Rabbi Berger said. “When all 70 nations unite in an act of love expressly intended for the king in Jerusalem, this will surely be answered by Hashem.”

Rabbi Berger described rabbis throughout the generations who would go to great lengths to express their anticipation of the messiah in a material fashion: designating a room for the messiah with special furniture or setting aside a special suit of clothing in which to greet the him. These rooms and clothes would remain untouched, waiting for their appointed purpose.

“In this generation, when it is clear that the messiah is imminent, merely waiting to reveal himself, we need to prepare our hearts by performing acts that strengthen our belief,” Rabbi Berger said. “By preparing an actual crown, we are taking the first step toward bringing the inner vision of a king into reality. The beauty of a true king has not been seen in the world since the exile began and the prophets assured us that it would return.”