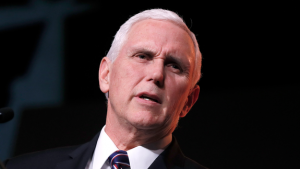 He likes Chili’s, using his personal AOL account for official government business, and gay conversion therapy. And so, when he addressed attendees at the Middle East conference in Poland on Feb. 14, it’s clear he believed that same down-home flavor that’s treated him so well in Trump Country would garner rounds of applause from his European audience.

That, dear reader, is where he went wrong.

Speaking about the widely supported Iran nuclear deal, Pence told those in attendance that it was time to follow in the footsteps of the U.S. and withdraw. The response, or rather lack thereof, from the crowd appeared to shock the veep.

SEE ALSO: Sure looks like Trump declared a ‘national emergency’ via the Notes app

The video pretty much says it all.

Amazing, right? The people of the internet think so, too.

Notably, this has been happening to Pence a lot lately. On Feb. 15, he was speaking at the 55th annual Munich Security Conference, and told those gathered that Trump says hello.

“I bring greetings from the 45th President of the United States of America, President Donald Trump.”